The Clock is a project aimed at making our world feel more connected. Different time zones are often represented by different clocks set amongst a wall. This separates us from other locations and creates a divide: this is our time, that is their time.

What if we had a clock that could travel through time and space to connect us with another locale?

The inspiration from the international clock arose from my frequent trips to Europe. I am a dual citizen Greek-American and I have never liked changing my watch when switching time zones. It felt as if I was severing a connection to my homeland whether it was leaving Greece or leaving the US. Especially lately that I have begun my Master's program in Germany, I do not like to switch my watch from American time. It helps me feel as if I have kept a piece of my identity with me.

The development of this project was not at all straightforward. It began simply with the purchase of a clock from inventables.com. 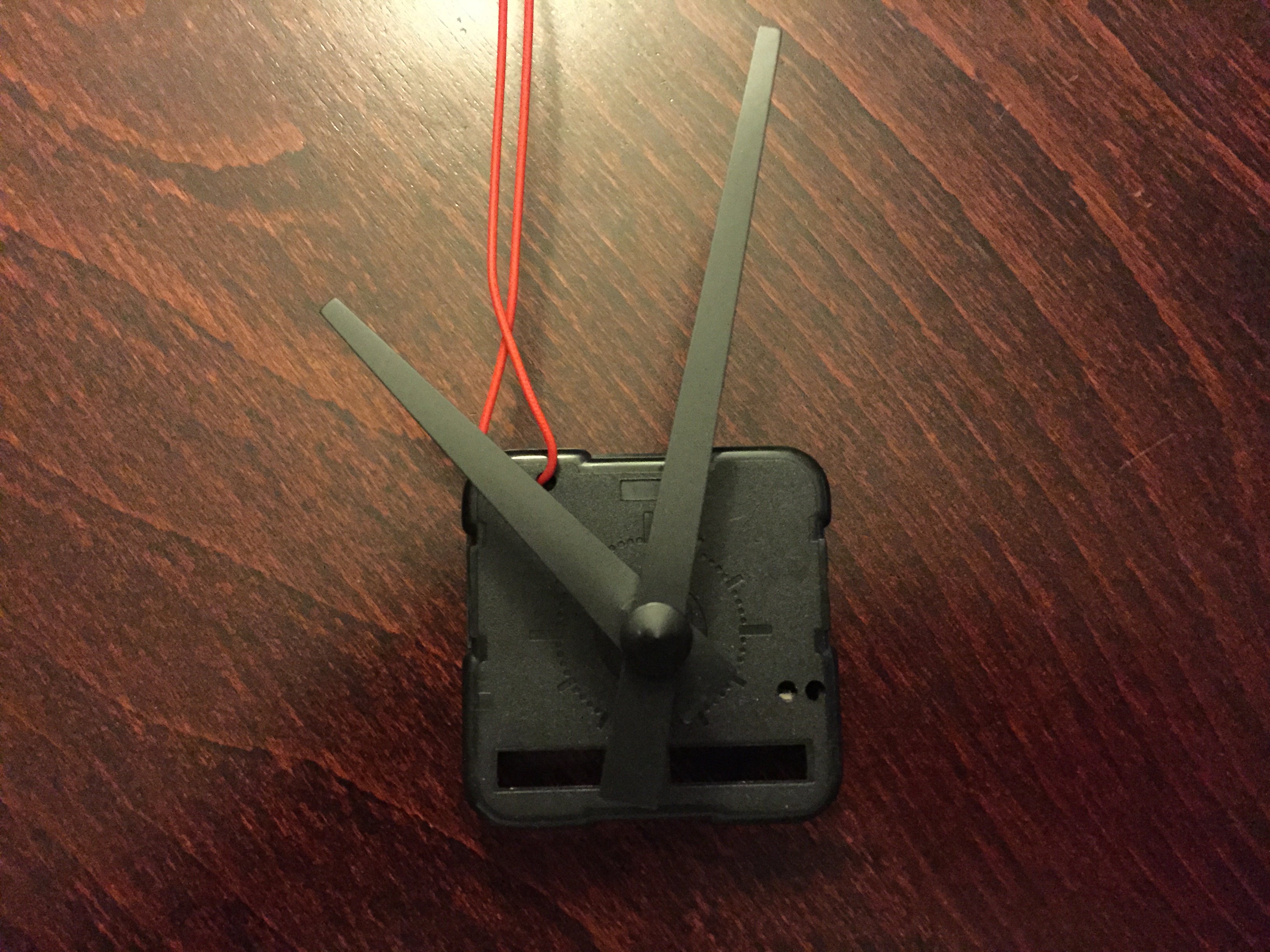 I wanted to figure out what makes it tick; literally. So I began disassembly and found out that actually the mechanism was relatively straightforward. 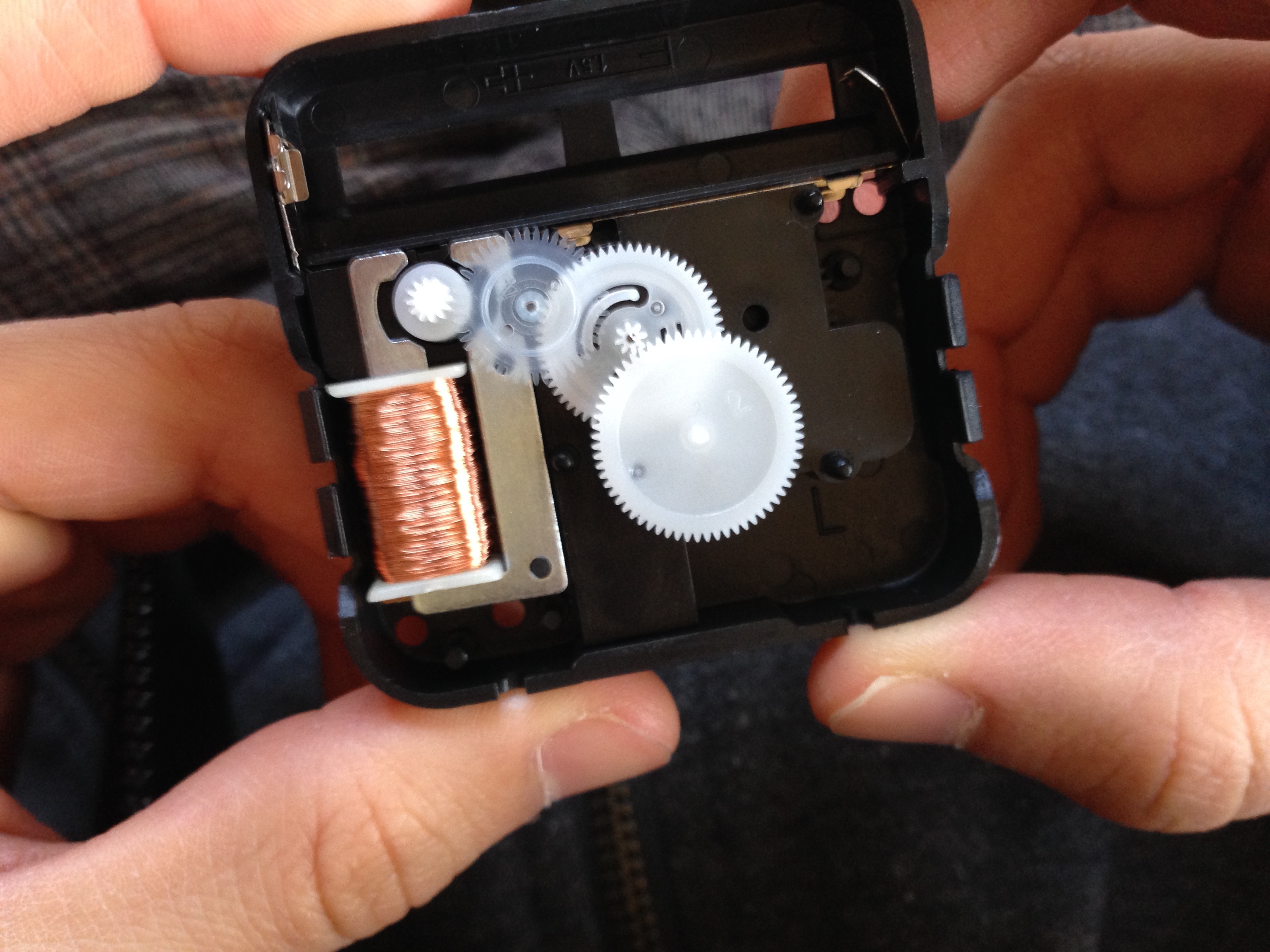 I then began to take it apart and figure out how I was going to control the actuation of the motor. I found that I could separate the motor from the rest of the enclosure. 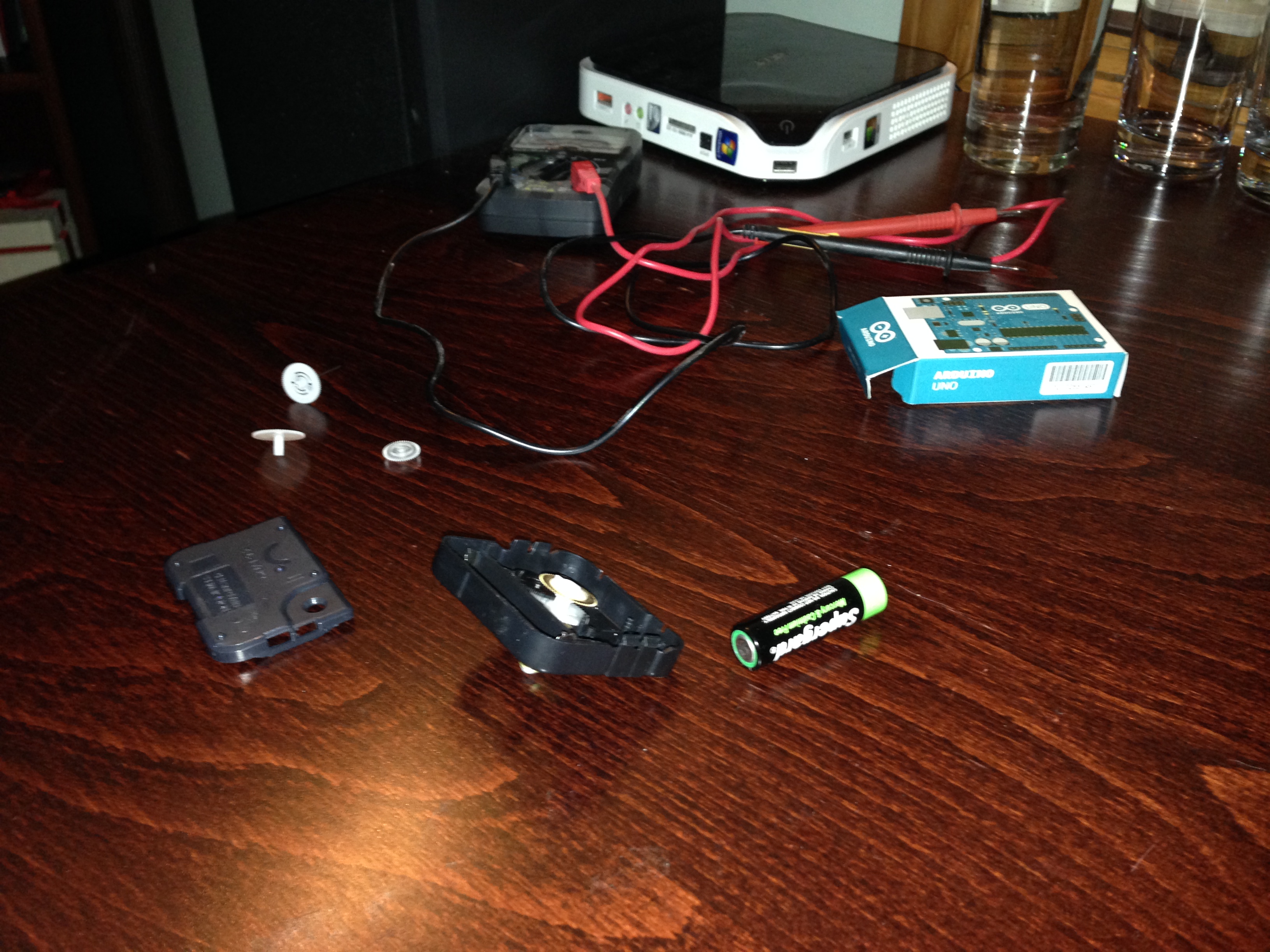 After separating the motor, a quick run with the multimeter confirmed that the quartz circuit underneath the motor was simply alternating the polarity. This would cause the motor to jump from it's initial position, to a half rotation forward. If you repeat this process multiple times, you get a full rotation, and thus accurate time keeping in an elegant stepper motor that uses the clock as its gearing.

Having discovered this, actuating the motor was a simple case of connecting leads to the motor and running them out of the clock enclosure, from there they could be manually controlled by an arduino. 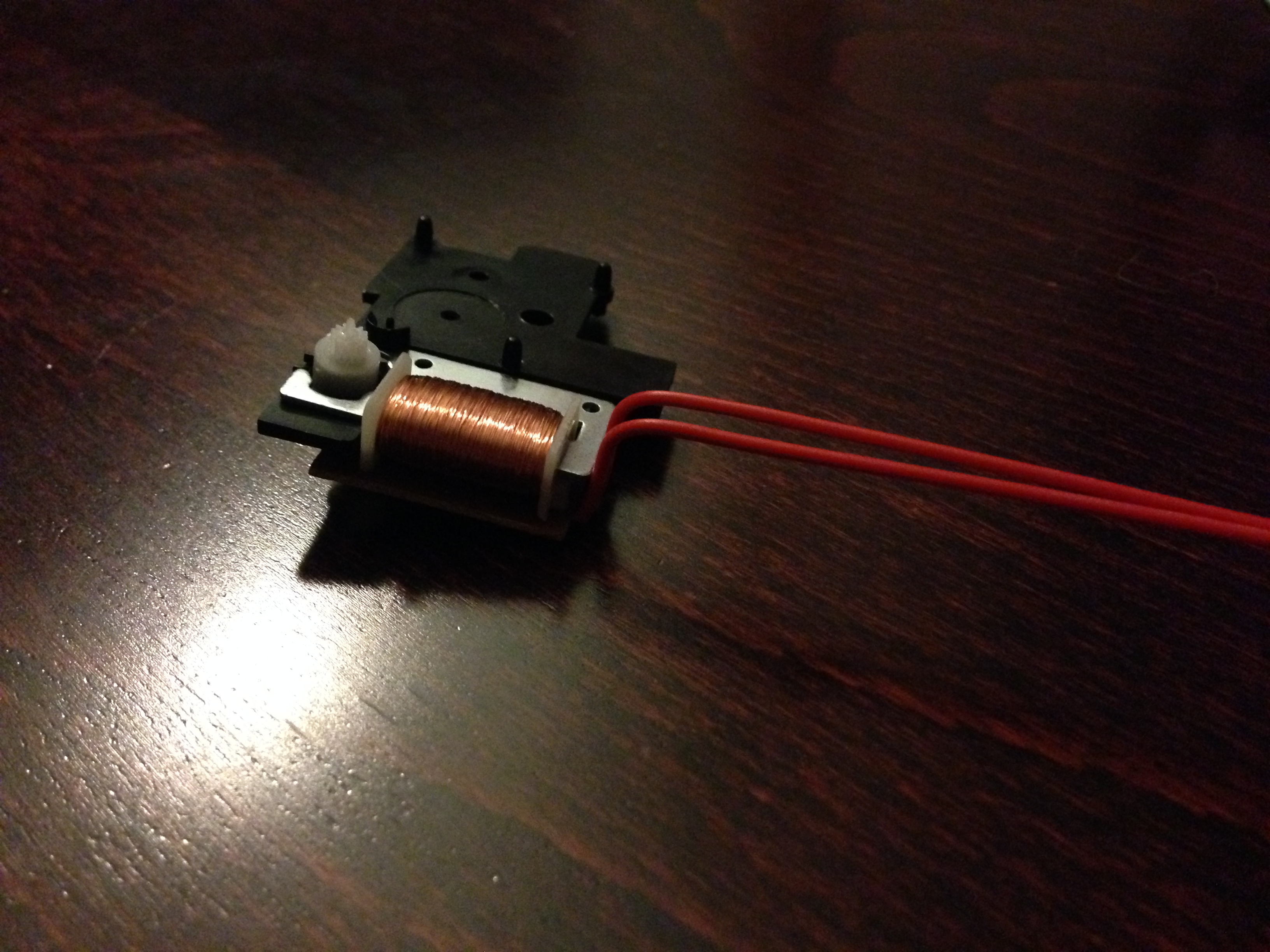 Here is quick video of the first attempts to get the motor to move. Unfortunately I had not supplied enough power to the motor and it was unable to make a full rotation.

After changing the duty cycle on the PWM pins on the Arduino I was able to successfully get the motor to rotate in emulation of the original quartz circuit.

Finally after successfully rotating the motor, I've reassembled the clock with my modifications in place and am demonstrating normal movement. The only modification is that I am doing a full cycle instead of half steps like the original quartz circuit.

After having reassembled the clock, I began pushing the limits of the little motor seeing how far I could take it. The result is, impressively fast.

After reassembling the clock I found that the performance was significantly lackluster in comparison with its disassembled performance. The difference can most likely be attributed to friction in the closed assembly.

I've achieved a good speed with the clock and have managed to make it operate almost as quickly as it did disassembled. There were strange mechanics in place with the gearing and it appeared that specific frequencies were prone to jamming the mechanism. I found that the ideal delay was 20 milliseconds between pinging the motor and then changing the polarity. For unknown reasons 17 milliseconds was detrimental as was a value of 30 milliseconds. I am sure there is mathematical significance to 20, but I cannot explain it.

The next steps involved adding some sort of control interface. I initially envisioned that someone could easily go up to the clock and press a switch to change time zones. At which point the clock would change the time and would show the new time in a display of some sort. Unfortunately this kind of change for a clock is difficult and uninspiring. It also adds a mental blockade and an identification of the country which is against the aim of the project.

Finally after extensive research and deciding that the voice recognition had to be integrated into the clock; I found EasyVR. EasyVR is a great device available from  http://www.veear.eu/products/easyvr/. I cannot recommend this product enough. After a few simple training sets with the Arduino plugged into my computer, I was able to implement voice recognition in an hour. The longest part of the implementation involved configuring virtual box with Windows XP and guest additions (VR Commander (the training and configuration program) only operates in Windows). 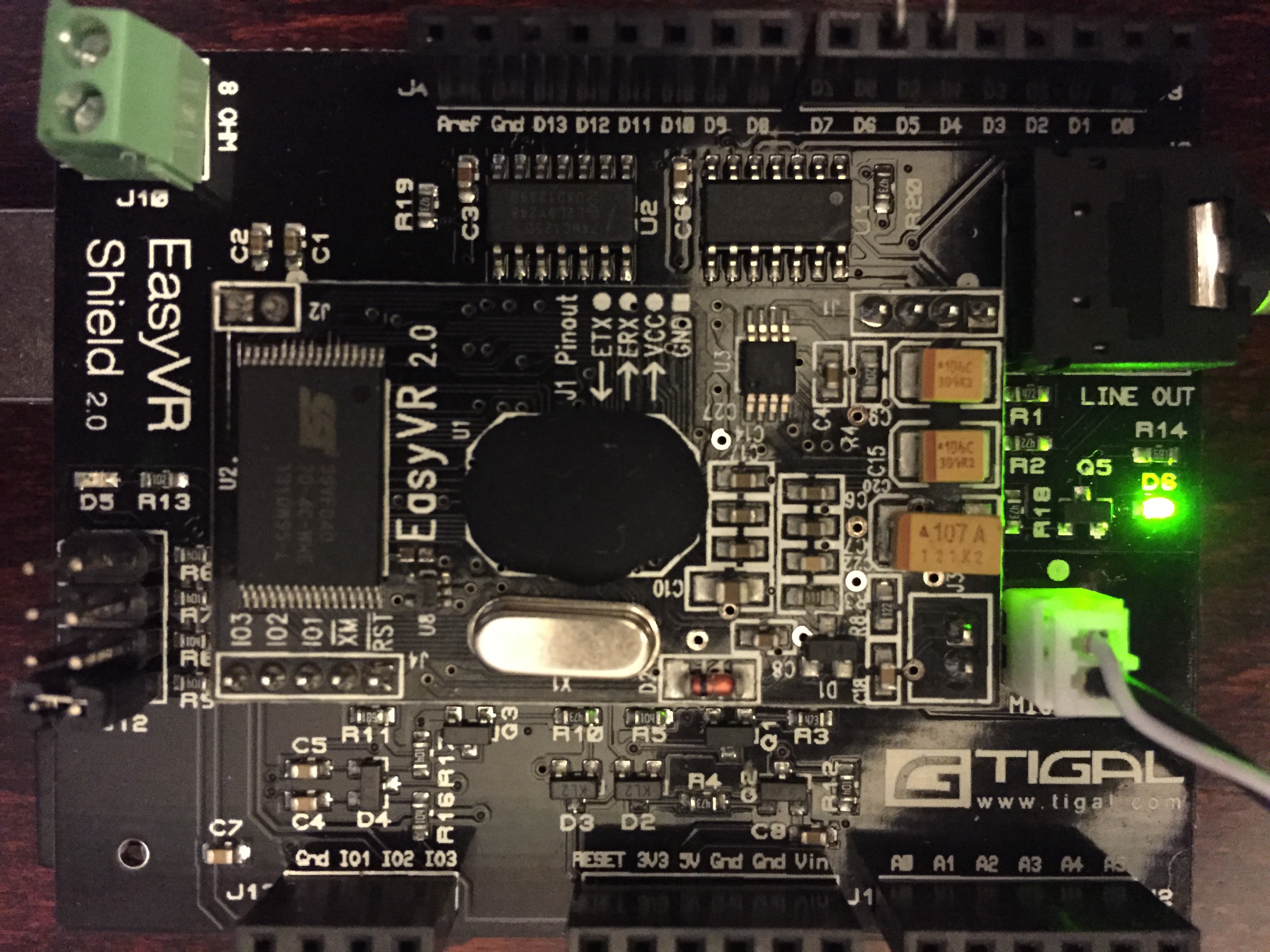 A final demonstration of the project in its current state with integrated VR. The clock operates as normally until prompted, at which point it will "switch" to a new time zone. A helpful nudge is necessary to deal with the jamming of the gears. I attempted to solve this by implementing a logarithmic acceleration algorithm in the code, but found that as the clock progressed through certain frequencies, it was unable to cope and would jam.

As suggested in the video, there are plenty of potential future improvements. The most obvious one is greatly increasing the speed of the time zone switching by integrating a servo into the clock adjustment mechanism that currently exists on the clock. Modulating the motor to change the time is possible, but lacks the speed and reliability (frequent jamming) when spinning at several hundred times its intended operational parameters.

Another great improvement would be integrating wifi into the clock so that it may be exact by utilizing atomic clock data. The original clock had a quartz circuit inside, which is accurate, but over time and day-light savings it may be inaccurate.

I hope you enjoyed my project! The concept is that The Clock will help us become a more unified community. It isn't their time, and our time. It is our world's time.