This Program was an exercise in using a Speech API to integrate Speech recognition into a desktop Python application. 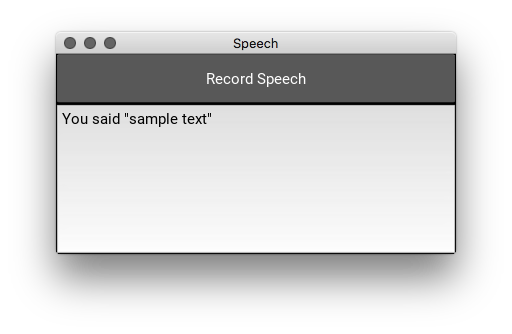 The first thing I did was I instinctually looked at the Google Cloud API and signed up for an account. I saw that they had a way to send audio and get a text response. After ten minutes, I was not able to discern where the endpoints were, and decided to pursue another avenue. Google documentation is terrible, and this new product was absolutely no exception.

In the interests of efficiency, I googled to see whether anyone in the Python community had already implemented a wrapper or a set of tools, and it turned out they had, so I simply pip installed their module, ran the demo, and the demo already satisfied most of the requirements. It was BSD licensed and could therefore be easily used off the shelf.

The great Python library that I used is very aptly called speech_recogntion.

The project homepage is here: https://github.com/Uberi/speech_recognition.

As a note of caution, if you are to install on OS X, you should install PortAudio is a dependency.

Looking at the above code snippet you can see just how easy it is to use this library. It takes literally seconds to get started with it. No registering for keys on site, making key pairs, creating separate threads, etc. It just works. This is how all libraries should be written.

I then decided to combine the example I found with my favorite Python GUI framework (Kivy) and quickly made an example that included a button, and an output field (where it would display the result to the user).

Finally, with a few simple lines of code joining everything together, I was off the ground quickly with a complete demonstration.