The blurb on the GNU Screen home page is accurate, but difficult to understand:

Screen is a full-screen window manager that multiplexes a physical terminal between several processes, typically interactive shells. Each virtual terminal provides the functions of the DEC VT100 terminal and, in addition, several control functions from the ANSI X3.64 (ISO 6429) and ISO 2022 standards (e.g., insert/delete line and support for multiple character sets). There is a scrollback history buffer for each virtual terminal and a copy-and-paste mechanism that allows the user to move text regions between windows.

Let's demystify what GNU Screen is, and how you would use it by running through a potential use case (there are many, many more)

So what would you do? You can use GNU Screen! More likely than not, GNU Screen ships with your *Nix Machine. To test if it is already installed simply type:

If you are presented with a message as such: 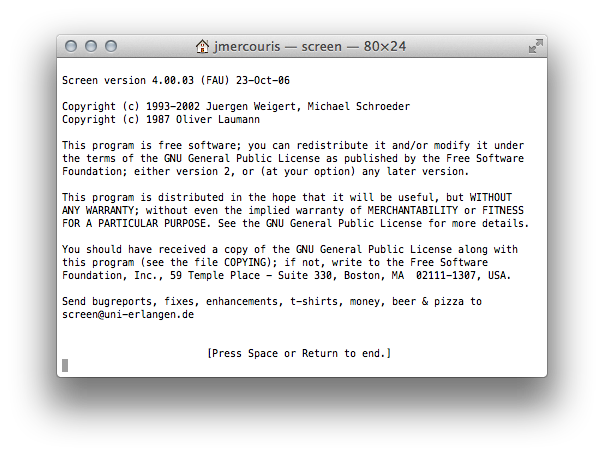 then, you have GNU Screen installed, congratulations, if not you can find it at:

Or, on Ubuntu you can install it with:

Now, here's how you use it! Think of Screens as virtual desktops or OSX spaces.

The first command we'll learn is how to make a new named screen.

Will produce a new screen with a particular screenname, let's go ahead and do it. Immediately we'll be presented with a new blank terminal. Or in this case, a new virtual terminal screen. 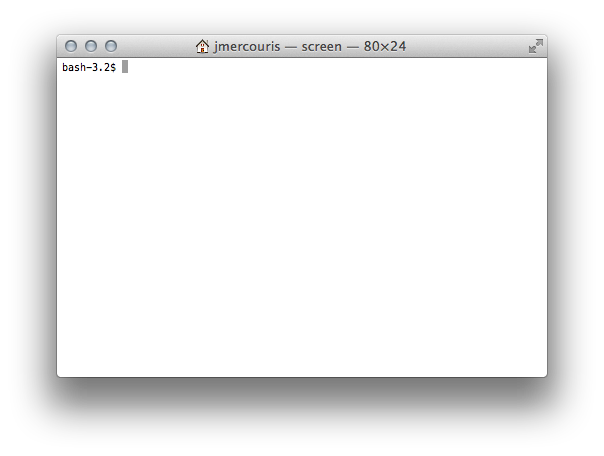 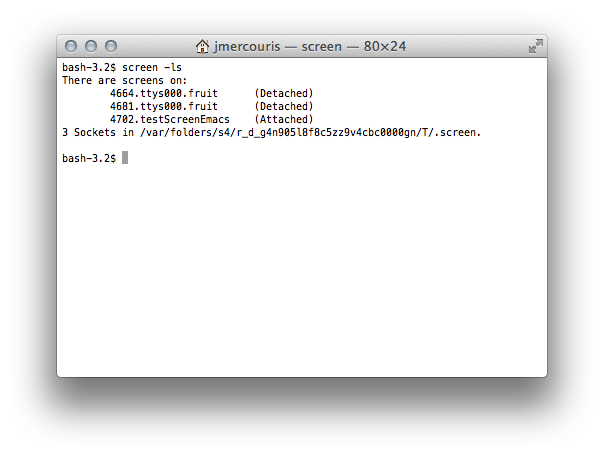 Now, if we want to "detach" from our screen session, that is, change our virtual display, akin to changing "spaces" on OSX, we will type the following key combination:

we'll then release all keys on the keyboard and press:

This will "detach" our running session, let's go ahead and do that.  After detaching, entering the command:

will show us the new state of our terminal: 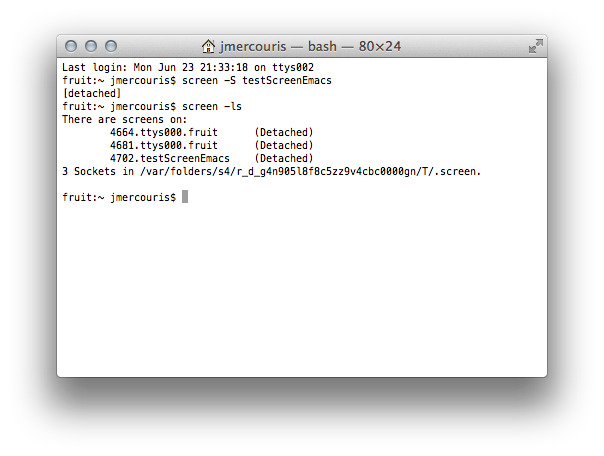 We are now detached from our previous session, and are attached to the standard terminal. To go back into our virtual screen, we type:

Finally, let us kill our test screen environment. The recommended way to do so is to enter the screen using

then entering the following key combination:

we'll then release all keys on the keyboard and type:

followed by the return key (enter).

Here is a reference of commands to use within Gnu Screen itself: Much like the Emacs commands C-n and C-p, Gnu Screen followers similar mnemonics.

You can always find more on the help screen C-a ?. Best of luck!